RE:  The WIPP mine disaster in February and March 2014.

Officials have obfuscated and minimized the radioactive contamination of the environment and the community, by asserting that the community is in no immediate danger, that testing is underway, and of course, by attempting to test as little as possible and by putting any release of meaningful test results on permanent hold.

So the inquiring mind is left to fend for itself.

I sought to construct a mental model of the WIPP mine ventilation system.  I wanted to understand for myself whether the situation as it is developing is really capable of getting out of control.

The DOE has previously offered for public access a document,”WIPP Mine Ventilation Plan.”  This document seems to have been recently removed from the DOE web site, leaving a broken link.

However, I eventually discovered an older DOE document (2012), with a different title, that serves my purpose.  It describes the WIPP ventilation plan at a high level, and offers diagrams and text which together describe not only the ventilation system operation, but also other WIPP activities such as transportation of mined salt to the salt handling shaft and up to the surface.

That document is here.

The following exerpted images can help you construct a mental model.  Study them, and you’ll see, for example, that there is no mechanism for “closing” the vertical shafts.  There is only the negative pressure maintained by blowers on the exhaust shaft, which causes air to be drawn in by the other three shafts under normal operating conditions.  That is all that is keeping us safe.  If there were to be an explosion, the mine would be free to exhale through all 4 shafts.

Here is a cross section of the Waste Shaft.  Note details such as: 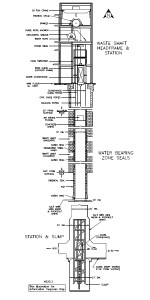 Here is a top view (plan view) of the entire WIPP mine in 2006.  Note these features: 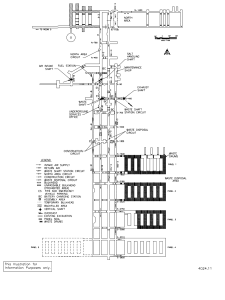 Here is a schematic diagram showing the designed air flow for the 4 shafts.  Note:

– four filters; last two are HEPA
– waste shaft seems to be the only elevator
– salt mining shaft must have a conveyor (a guess)
– input air shaft has only a headframe 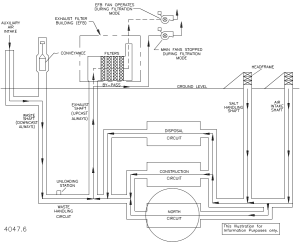 Here is a typical bulkhead.  Note: 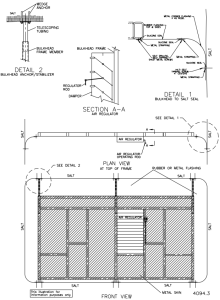